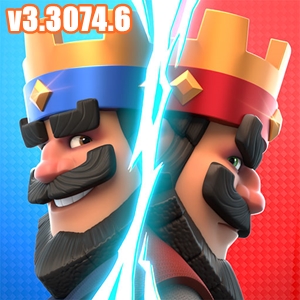 Great game, albeit not flawless.

Many early version issues have been overlooked and don’t appear to be in their sights(mostly how certain towers can stand idle longer than warranted if their target is killed early making it easily overflown, it can be fixed by not targeting one enemy alone but rather the presence of certain enemies with allowed set target-priorities, so if the target dies damage is then inflicted on the next nearest/in range enemy).

But, the one thing that’s truly aggravating is that when you’re on higher levels, it’s near impossible to go on a winning streak.

For all the battles you lose, you lose like 29 trophies and when you win, you earn like 28-31 trophies.

This makes it so hard to go on in the game and it’s beginning to get pretty monotonous.

Also, while are battling, sometimes I fight guys with lower trophies and they have cards from like 3 arenas ahead, that makes it very irritating.

I’ve been playing for almost 6 years, and this recent version is rubbish.

The limited radius of the anger spell renders it, and the lumberjack ineffective.

I believe change may be beneficial, but all these modifications are badly harming the experience for me.

Also, it’s practically impossible to proceed unless you buy the battlepass monthly.

After then, it seems the battles are lot simpler, and you’re able to trophy climb

I would rate 5 but the game keeps freezing and randomly darkening and I have to press the back arrow to fix it and sometimes I’m about to win and the game crashes for no reason like say there’s thirty seconds left and I destroyed two towers and I have all of mine then the game crashes and I get back in literally right as they destroy my king tower and I’m like just really frustrated because it’s already happened like fifty times before that.

This is a pretty nice game indeed………with the release of new cards different decks and tactics may be formed .

But it would be a good if we can speak with the opponent during battle(by chatting I don’t mean picking words from pre written choice).

It would be incredibly useful.

Fun game to spend time, not a p2p as long as your not lazy, have fun.

With all the latest changes, reason I slipped to 3 star, it has slowed down.

There’s a lagg from when I touch the screen and the characters really descend, it’s definitely hampered my game play and losses.

I’ve been playing Clash Royale since 2017.

The year when the game was at its greatest.

Today, everyone is using cycle decks, 2.6 decks etc., which makes it so impossible to win when you’re playing with a regular deck and you’re constantly getting foes with these decks, who also have over-leveled cards.

This game would be a 5-star if the match-ups were the same or comparable to your deck and levels.

The game has simply transformed into a pay-to-win.

The problem with the match-up system has to be solved.

The update altering competitive and trophy road is a major improvement.

The only complaint we have is the clan war system.

The previous war system was so much better, where you conducted prep fights to acquire cards and then you created decks with those cards.

Now, if you don’t have four entirely maxed out decks, you’re certain to loss half of your war battles versus opponents who have spent money to max every card they have.

The previous method made you rely on each other more, it was fantastic

Fun and tough and incredibly addicting!

Could do without the emojis and tower skins as prizes in Pass Royale though.

I dislike paying for them and may quit using Pass because of them.

In the last year, the game has been less entertaining.

All meaningless, as far as gameplay goes.

But my main gripe is with the Mega Prince which is so strong that it’s practically hard to win against it, even at the same level.