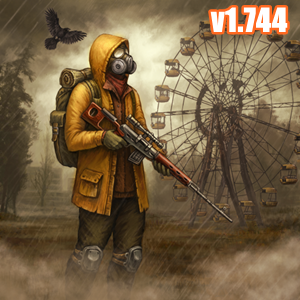 This is one of the greatest RPG games that I have ever played.

The post-apocalyptic gameplay is incredibly immersive and the resource management and gathering mechanism is pretty amazing.

The controls are incredibly intuitive and responsive.

However, I have experienced a softlock in the Boatman side quest.

I acquired the sulfur and saltpeter and started the struggle.

However, I perished in the combat and now have no means to continue it, because I need another 100 saltpeter and sulfur.

Other than this, 5 stars.

Definitely tough but looks to have a decent balance.

It would be wonderful if the game featured some additional description and history about the various towns and surrounding areas.

Also looks some of the latest upgrades are really decent and offer some important adjustments and features.

Once again the devs went beyond and took the amazing original and made it worse.

It used to be much better when you could fix automobiles and had alternatives.

They have succeeded in providing you less alternatives, that’s making games dull and unfulfilling.

I would love to know how to obtain the original without any updates.

That’s the way I recalled it and appreciated it.

Not so much anymore.

Ads no longer start muted, which disturbs the mood.

By far the worst offenders are the TikTok and Facebook advertising.

They cannot be silenced, and they make it tough to click away.

I am growing to strongly dislike them.

The lottery menu image belongs in a separate game.

The revised item balance has boosted relevance for many things, however the difficulty increase has generated unneeded progress slowing.

Very very difficult, even in sandbox mode, offline of course and not premium.

But, after roughly the 7th new game, survival certainly becomes simpler and don’t underestimate hunting, is highly value doing that a few days per month or so.

Really a terrific game especially for offline, and being free.

Watching commercials provides you gold occasionally providing you the chance to buy goods you’d otherwise have to pay actual money which is amazing!

The game is pretty enjoyable it’s like a topdown map perspective of a Russian fallout.

Combat is a grid system with action points.

Your dogs cant die permeantly which is awesome.

Premium is worth it for 99¢ it delivers a fantastic raven

There’s a nice number of stuff the advertisements do but dont have to utilize them it simply takes extra time and resources.

Hasn’t forced advertising so far \sI truly do like the game at the end of day it’s really came a long way.

I recall earlier when you could Rebuild Gun’s, Motorcycle, Cars and Trucks , Search and Find more Realistic Items while looting Bases and Bunkers.

I enjoy the changes with the commerce and towns and missions it keeps it fresh I recall going a long way before even coming close to meeting a modest settlement.

That’s for the game hope to keep seeing updates

A tough survival game with amazing atmosphere (but I enjoy the idea that if you locate a pet wolf, he’ll resurrect with you if you die).

Survival becomes considerably more sustainable after you arrive to the first trading town.

Also I realize the Chirstmas event is transitory, but it appears to have exacerbated crashes, freezes and occurances of that bizarre issue where the hunger / thirst / energy meters stop visibly updating as you consume food yet you receive a contradicting “you are full” message.

This game has came a rlly long way in the last 3 years, I’ve have stopped playing this game and game back to it more times than I can count, but after an update about a year ago, the grind for consumables for radiation after you hit the first village is insane, no matter how hard I try ot how long I prepare before moving on I always end up with 100+ rads and no way to get rid of them, needs to be balanced, but other than that games is still at fun as it was 3 years ago